By now I've become pretty familiar with German culture.  And for the most part, I like it very much.  After all, I wouldn't be living here if I didn't feel some kind of affinity with German-ness.  Nevertheless, there are some aspects of German culture that continue to elude me.  Little quirks that leave me completely perplexed.  Here are ten of them, in no particular order.

1. Everything is on time… except Deutsche Bahn.
Germans value their Pünktlichkeit above all.  Or so it would seem.  When you live in Germany, you learn that there is one major exception to this rule: Deutsche Bahn.  For Deutsche Bahn, schedules are meaningless.  In fact, I’m pretty sure that Deutsche Bahn employees spend their spare time sitting around laughing at the so-called schedules and the customers who are naïve enough to actually believe them.

If there is one rule in Germany, it’s that the trains are never on time.  After a couple of train journeys, you learn to expect the familiar announcement: “Sehr geehrte Damen und Herren…” followed by a verbose explanation about why your train is going to be late.  At this point I’ve learned to adapt to the tardy trains.  I book my trip so that there's a window of at least two hours before I need to arrive.  And then I pray.

2. Jaywalking is a cardinal sin.
If you come from Canada or the States, you know that it’s *technically* against the law to cross when there’s a red light.  But this law is more of a guideline, to be followed within reason.  If there are no cars on the road, of course you’re going to cross.  Why should you waste time waiting for a light to change colour when it’s perfectly safe to walk?  Why, you may ask?  Because you’re German.  To the Germans, the Ampelmann is an emissary of God, to be followed austerely with a fervent devotion.  Any transgression against the command of the Ampelmann will be viewed as a cardinal sin.  You will be punished severely with hellfire and brimstone.  Or at the very least, you will be chastised sternly by any nearby Germans.

3. Speeches are sacrosanct.
Germans looooove to make speeches.  Long, long speeches.  You cannot expect to attend any event and not have to listen to at least two self-important Germans make a speech.  And don’t expect the speech to be clear or concise either.  It will be as long-winded as possible.  Full of flowery overly-formal language which is unnecessarily difficult to understand.  I think this is why Germans eat so many cold cuts and potato salads.  This way they don’t have to worry about the food going cold while they listen to the speeches.

4. There is no concept of queuing.
Where I come from, queuing is kind of important.  It’s polite to line up, and Canadians pride themselves on their politeness.  The last time I was in Toronto, I looked on in wonder as people at the bus station formed two perfect lines where the bus doors would open.  The bus hadn't even arrived yet, and people were already thoughtfully anticipating how they would board it in an orderly fashion.  It was truly a beautiful sight to behold.  Here in Germany, however, people don’t queue.  They swarm.  There is no concept of waiting your turn, or first come first served.  The idea is that you push and shove, and if you have sharp enough elbows you will get where you want.  This is particularly disconcerting when exiting and entering trains.  You would think that people would wait for you to get out before pushing their way in, but oh no.  It’s mayhem, I tell you.  Total mayhem!

5. Everything is dead on Sundays and holidays.
So I've been living in Europe for a while now.  I've gotten pretty used to things being closed on a Sunday.  I understand this is not a culture of speed and convenience, like the one that I come from.  Sunday is not for shopping and consumerism – it’s for quiet reflection, reading, gardening, and spending time with family.  I get it, ok?  In fact I think it's kind of a nice idea.  So I think ahead, and I make sure I have everything I need from the shops on a Saturday.  What has come as a total surprise to me, however, is the way things shut down on holidays.  For example.  Christmas Eve is a day of hustle and bustle, right?  The day that everyone goes out to do their last-minute gift shopping and buy more butter and flour for Christmas dinner?  Not in Germany.  This year, to my shock and horror, I discovered that everything shuts down before 3pm on Christmas Eve.  And I mean everything!  Want to enjoy one more merry glass of Glühwein at the Christmas market?  Forget it.  The Christmas market is already shut down and packed away for the year.  On Christmas Eve, a busy German city will transform into a ghost town.  It’s actually really creepy.  The same goes for New Years Eve, New Years Day, and a bunch of random local holidays which will probably take you by surprise.  Basically, don’t expect to be able to get anything from the shops.  Ever.

6. Fresh air is important, but drafts are dangerous.
I don’t think I’ll ever be able to wrap my head around this one.  Germans are often opening their windows or going on little walks for some "frische Luft".  At the same time, they have a pathological fear of drafts.  The most common complaint you’ll hear from a German is “es zieht”.  Why are drafts so dangerous?  Well, apparently Germans believe that drafts will make them sick.  Colds, flus, pneumonia, arthritis, the bubonic plague – you name it, and the Germans will most certainly blame it on a draft.

7. Air conditioning is also deeply suspicious.
Like drafts, Germans have a deep-seated suspicion of air conditioning.  They believe that the artificially circulated air will make them sick.  It doesn't matter how uncomfortably hot you are.  It doesn't matter if you are suffocating or fainting from heat stroke.  Apparently it is healthier to remain cooped up in a stiflingly hot muggy room than to turn on the air conditioning and – God forbid – allow your body to return to a regular temperature.  I have no idea where this superstition comes from.  All I’m going to say is, I've spent many summers in air-conditioned Toronto not getting sick.

8. Everything must fit neatly into a category.
If it doesn't, people will react with panic and confusion.  Germans like to sort everything into boxes.  They like everything to fit into one box, and one box only.  Anyone who’s familiar with the fach system in opera will be aware of this, but trust me, it goes much further than that.  When I opened a bank account here, I was interrogated about the nature of my work.  Not only did they want to know that I was a freelance singer, they wanted to know exactly what kind of singer I am.  Do I sing opera, oratorio, lieder?  Do I sing as a soloist or in choirs and ensembles?  When I replied “all of the above” the lady at the bank looked horrified.  I’m pretty sure she almost had an aneurysm.


9. You have the right to offer your complete, uncensored opinion to everyone.
It doesn't matter if they’re a total stranger crossing at a red light (see above).  They should still hear your opinion.  Germans feel they have the right to judge everything openly – and with no sugar coating.  Sometimes this kind of blunt honesty can be refreshing.  One could argue that it's better than being dishonest for the sake of being “nice”, as people often do in Canada.  But sometimes you’re minding your own business, not asking for an opinion, and a German comes up and assaults you with it anyway.  I mean, come on people!  That’s just plain rude. 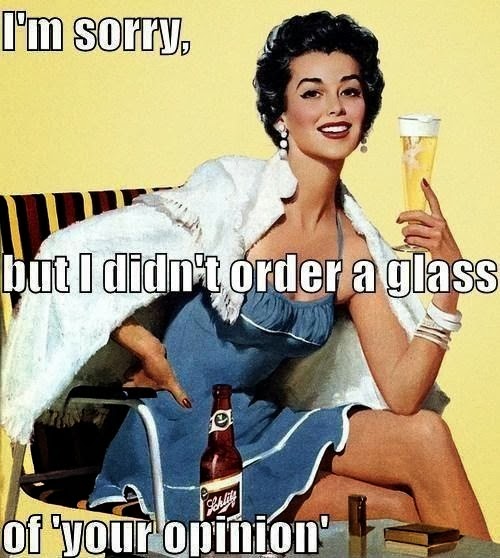 10. Cake hardly ever tastes as good as it looks.
I cannot count the number of times that I've ordered a beautiful piece of cake at a German cafe, only to be sorely disappointed.  It looks like it should taste glorious, but it's just a bland lump of flour and butter.  What gives, Germany??  Are you not allowed to use sugar in your baking???  The weirdest part is that these cakes, as well as being completely tasteless, are extremely fatty.  Talk about a waste of calories!  If I'm going to break my diet, I want my tastebuds to at least enjoy the experience!

Germany, I love you dearly.  But some of your oddball traits will puzzle me until my dying day.  At the very least, I can congratulate myself on taking things lightly.  While many of these things used to make me cringe with frustration, these days I’m able to brush them off with a chuckle and a shrug of the shoulders.  After all, aren't we all a bit weird?
Posted by Brynne at 19:34

Brynne
I'm a mezzo-soprano from Toronto, Canada. Having spent three years in Scotland, where I had a "real" job in arts administration, I moved Belgium to study at an opera studio, and am now working freelance in Germany. This blog is about the "dare" I've taken in choosing this path, and the many changes and challenges that I'm meeting along the way.

Check it out here.